Malaga, the capital of the Costa del Sol, can be known without spending too much; In fact, there are many activities to do and places to visit that cost nothing. It has been known worldwide for some years for having more than 30 museums and some of them can be visited for free.

Museums that are free to visit

This is the case of the Museum of Malaga, one of the last to open in the capital and which has as its headquarters the old maritime customs of the city, which was also for many years the home of the governor of the province.

The building, designed at the end of the 18th century, houses the Museum of Fine Arts and the Archaeological Museum of Malaga. Both are free for citizens of the European Union and non-European citizens only pay 1.50 euros to enter.

Tip: Go up to the terrace and have a coffee there. For a couple of euros you’ll get a beautiful view of the Alcazaba, Gibralfaro, the sea… 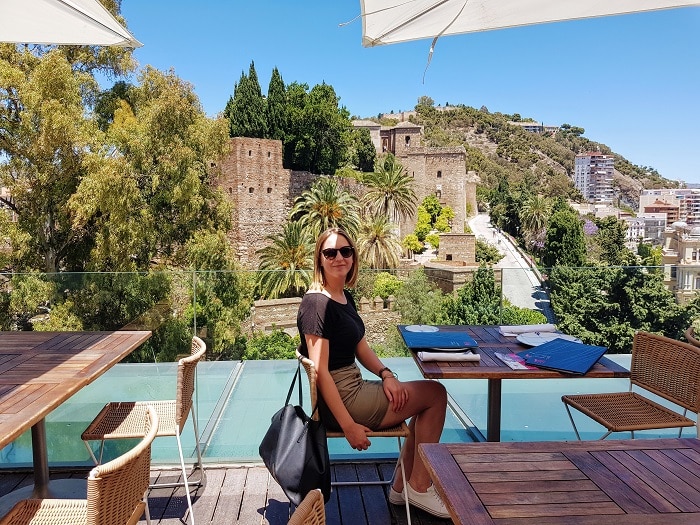 And if what you are looking for is modern art, the Contemporary Art Center (CAC Málaga), located in the old wholesalers market, next to the Guadalmedina River, is free all year round and offers high quality exhibitions throughout the year.

If you are in Malaga on a Sunday you are in luck, because some of the main museums of the city are free, as is the Picasso Museum Malaga, the Center Pompidou, the Collection of the Russian Museum, in the old building of Tacabalera, of a lavish regionalist style or the Casa Natal (Birthplace) of Picasso.

The Historic Botanical Garden of La Concepción, which belonged to one of the most important families of the Malaga bourgeoisie of the 19th century, the most important subtropical garden in Europe, can also be visited for free on Sundays.

Alcazaba & Roman Theater at your feet

For those who want to know monuments without paying entrance, you have the possibility to walk along the walls of the Fortress of Alcazaba and also enjoy unique views of the city, including the Roman Theater, which will be at your feet.

A new pedestrian walkway (Pasarela-Mirador de la Alcazaba) has been opened in Malaga, which you can access from Alcazabilla street- check Google Maps here-, with this fabulous monumental panorama at your disposal. 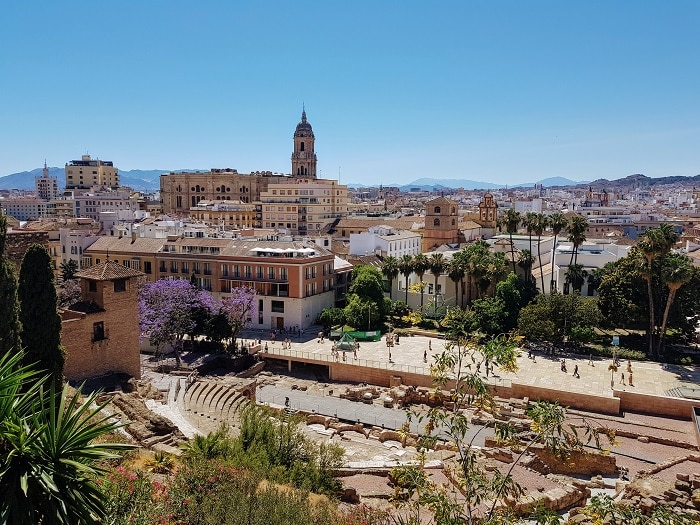 Views from the top of the walkway

Up to Gibralfaro Castle

A similar experience can be had at the viewpoint at Monte de Gibralfaro, at the foot of the castle of the same name, which you can enjoy walking up Paseo de Don Juan Temboury street and bordering the Alcazaba.

You will have a ‘postcard’ view of the city, including the Jardines of Puerta Oscura, the beach and the neighborhood of La Malagueta, the Muelle Uno and the bullring. Of course, the climb is somewhat hard. Those who do not dare to go on foot can do so by car or bus (line 35 of the EMT). 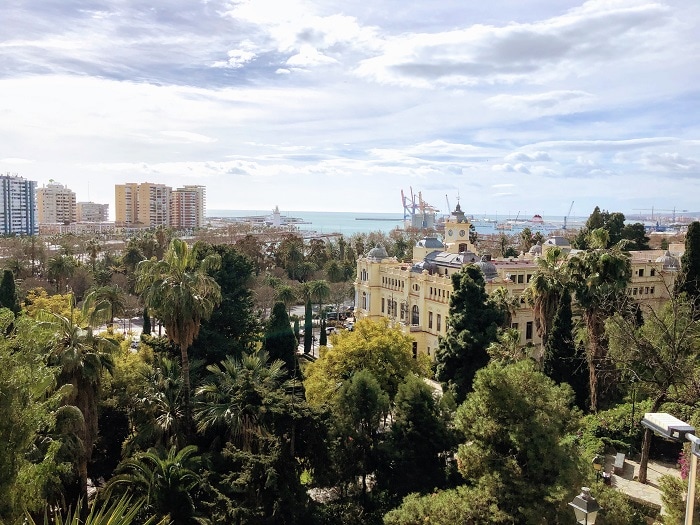 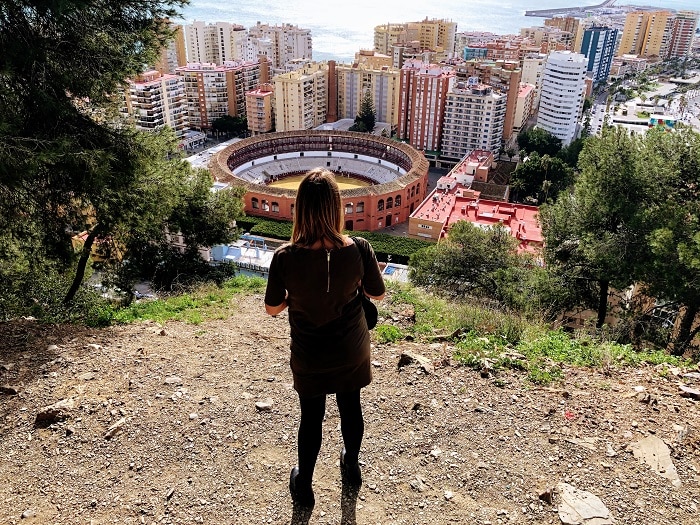 You also don’t need to pay to visit the historic churches of Málaga, distributed throughout the old town and whose oldest example is the Iglesia de Santiago (Granada street), the parish where Picasso was baptized. 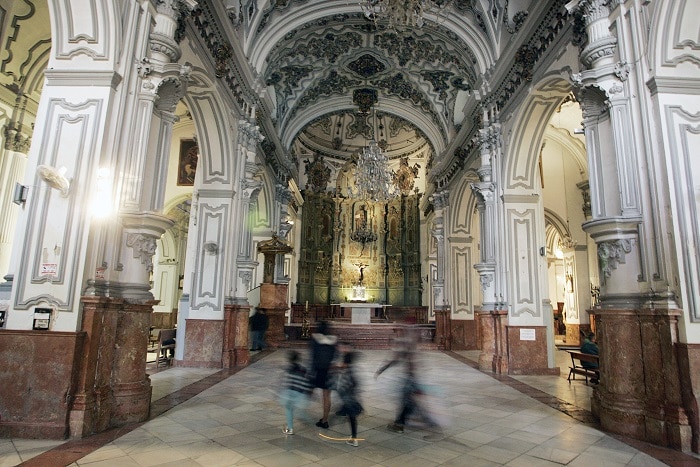 It’s worth visiting the Parque de Málaga, built on land reclaimed from the sea at the end of the 19th century, due to the subtropical flora it exhibits. Also highly recommended in the West area of the city, is the so-called Parque del Oeste, the largest in Malaga, with a wonderful collection of sculptures by the Bavarian artist living in the Andalusian capital, Stephan von Reiswitz. 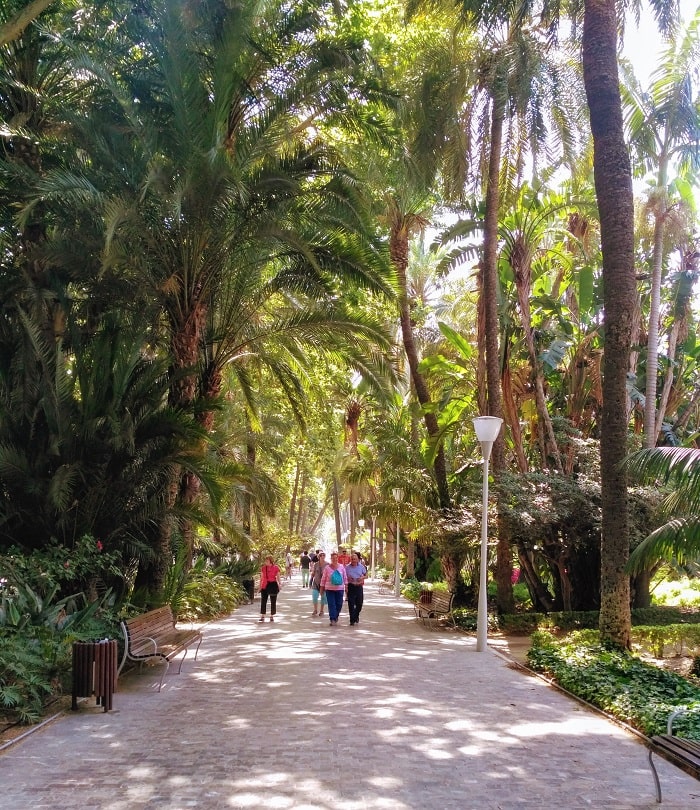 And of course, you can not miss Muelle Uno, an old port area open to the city that has been a great success with visitors. You can enjoy a long walk from the entrance of the Port, in front of the Plaza de la Marina , passing by the Palmeral del las Sorpresas -Palm Grove of Surprises-, a leisure area facing the sea, and crossing Muelle Uno, the area of bars, restaurants and boats of recreation.

And while you’re at it visit the old chapel of the Port, of the XVIIIth century and the Lighthouse of Malaga, popularly known like La Farola. 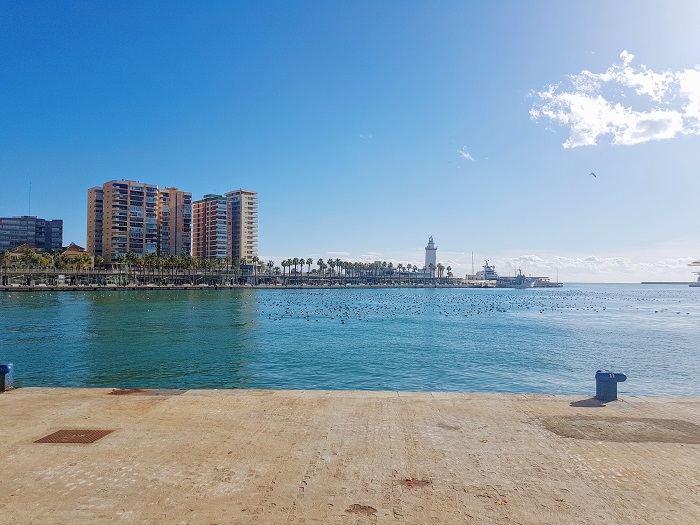 Muelle Uno and La Farola at the end

If you dare, take a 45 minute walk by the promenade to Baños del Carmen, an old spa that just turned a century old, with unique views of the Bay of Malaga and then continue to the neighboring beach of Pedregalejo, with small coves thanks to its breakwaters and where many of the best bars and chiringuitos are concentrated. 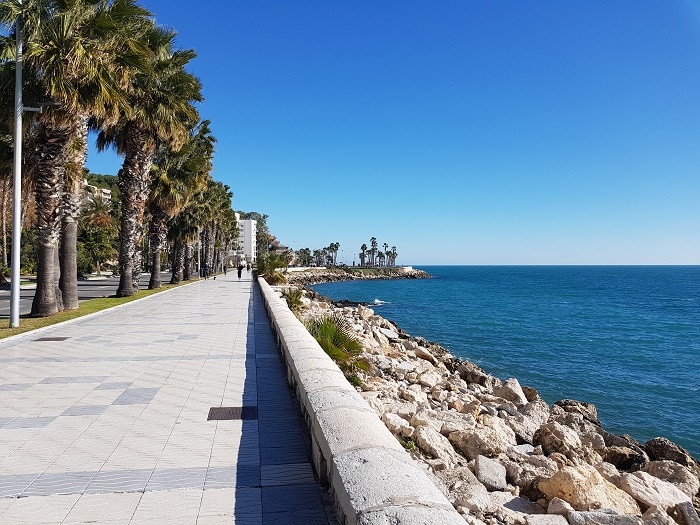 In the city centre, another area of the city worth visiting is the Plaza de la Merced, from the 19th century, where Picasso’s Birthplace is located as well as a sculpture sitting on a bench of the famous painter from Malaga, with whom you can take a photo.

Another immortal character you can take a picture with is the sitting sculpture of Hans Christian Andersen, who visited Málaga in the 1860s. The sculpture of Andersen is under a palm tree, very close to the Málaga Palacio Hotel and Larios street and watch out because in one of the Danish writer ‘s duffel bags his famous Ugly Duckling appears.

In reality, the statues of Andersen and Picasso are just one reason to explore the Historic Center, with most of its buildings from the nineteenth century and its network of pedestrian streets, as the quintessential, Larios Street, which culminates in the Plaza de la Constitución, the old main square of the city, an urban reform of times of the Catholic Monarchs. 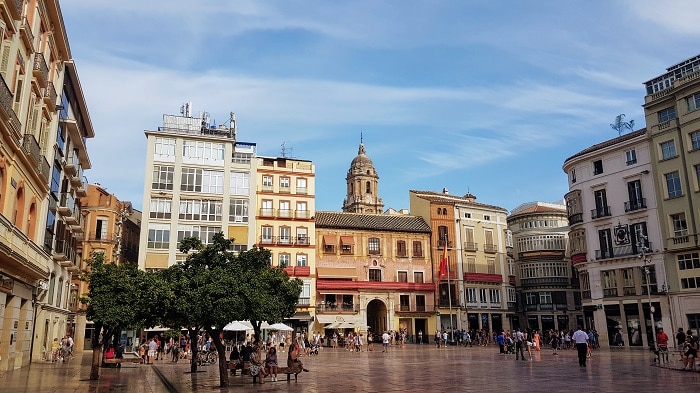 Also from that time, the end of the fifteenth century, is the commercial Calle Nueva, born shortly after the Christian conquest and leading to the lively Puerta del Mar and Alameda Principal, with a double row of large ficus from the 1870s .By the way, if you’re in that area you can’t miss another free visit: the Atarazanas Market, the city’s central market, with a lavish Nasrid façade that reminds us that it was an imposing shipyard during the Muslim era.

All of this merits a free visit to Malaga. If you want a more organized trip , you can sign up for one of our walking food tours to pamper your palate while discovering the city!