It’s not gazpacho, it’s gazpachuelo and this is its Malaga route. The gazpachuelo malagueño is tradition, history and flavor of the south. It is also the dish that all mothers know how to make. 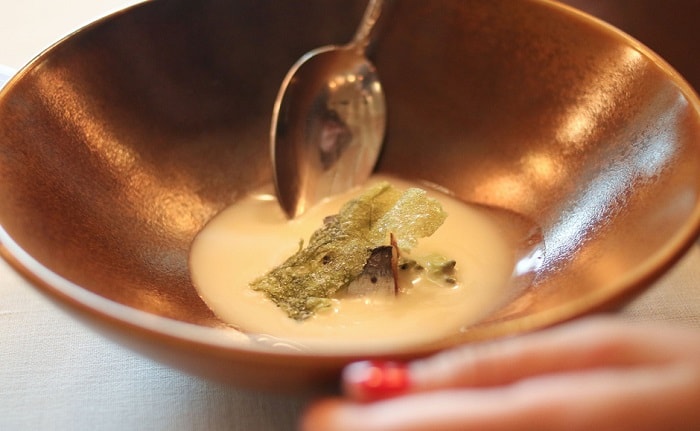 In order not to enter into family disputes about which one prepares it better, we have decided to carry out   a route through different restaurants in the province to try some of the tastiest in Malaga.

Some bet on tradition, others on innovation, but they all have something in common: you’ll want to repeat again and again.

If every mother makes it differently, so does each kitchen. Maybe that’s why the so-called   Malaga Observatory of the Russian Salad and the Gazpachuelo , which even offers a decalogue with the main canons that must be considered when preparing it.The entity has a  Facebook group that exceeds 11,000 people, which shows that this tradition pulls greatly on Malaguita gastronomy.

“We cooks feel responsible for preserving this type of dishes.At home people prepare it less and less and we must keep them alive, “says chef Javier Hernández, of El Restaurante del Candado Golf, who stresses that to cook it well one must ” respect it and give it the value it deserves “.

The delicacy of its ingredients and the complexity of its technique (“it’s not just about mixing a broth and mayonnaise, proportions or temperature are very important to get the right texture and that the sauce does not curdle”) make it not suitable for all menus.

However, for Hernández it is a dish that has always been part of his menu. Its recipe has as main pillars an especially strong fish broth, a rich mayonnaise with a little lemon and, finally, wedges of potato as a side dish.In his case, there is a guest ingredient: rice.  “I think it gives it a little more strength and allows it to be a unique dish,” says the chef.

Nearby, in the neighborhood of El Palo , the roots also call for for the gazpachuelo Juanito Juan restaurant (Avenida Salvador Allende, 26) , a classic picnic area much loved in paleño territory. And also one step away, in Rincon de la Victoria, the inn   Rincón de Emilio   (Calle Ronda, Edif. Ronda nº15 Local 4) is another sure place to taste this dish. 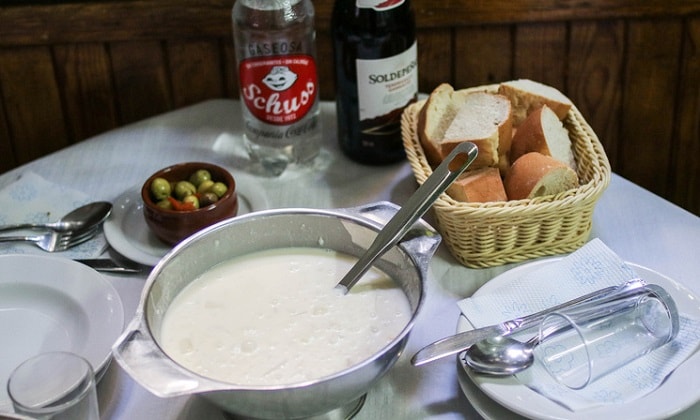 The tradition of the gazpachuelo has remained thanks to generations of grandmothers and mothers, who have respected the recipe and have served the dish to the vast majority of families from Malaga.

For those who do not have their own, the most immersive experience can be lived in Fonda Casa Pepa, the place where Pepa Baez has managed to get Carlos himself to sit down at one of her tables to enjoy the menu.

The dining room is exactly the same as your grandmother’s , with a piece of furniture full of photos of her daughters and granddaughters doing communion, graduating from college or on family vacations.

Located in the urban area of ​​the beautiful town of Carratraca , in its living room a radiator heats the atmosphere.The TV plays loudly showing the news of the day, while in the background they sing some canaries surrounded by a jungle of aspidistras in a small patio.

The waitresses offer only two options for the entree and another two for the main meal. Always on the basis of what Pepa wanted to cook that morning.Of course, the daily menu always has a gap for the gazpachuelo, which is the only dish that repeats from Monday to Sunday.

“Karlos Arguiñano came to taste it , he recommended it in his program and, since then, everybody asks for it”, emphasizes Juana, one of Pepa’s daughters, who caters to diners with her sister Dori and her brother-in-law Pepe.

The perennial homemade flavor floods the pot that they leave on the table for you to serve at your discretion, along with a bottle of red wine and another bottle of casera. The gazpachuelo here is a   broth where, in addition to potatoes and rice, the white of an egg is diluted to give it flavor and forcefulness in the cold winter days.

Back in the capital, you have to go to Alexso to taste the gazpachuelo conceived by José Antonio Moyano.

The chef gives the keys of an “essential” dish in his letter: “The most important thing is the fish stock, which must be powerful and fresh.

The mayonnaise is also fundamental, at its point of lightness and finished with a drizzle of a good extra virgin olive oil , “says the chef, who emphasizes the importance of the quality of the oil to give the exact flavor.In his case, he uses a local one developed in Villanueva del Trabuco and called   100 Caños . 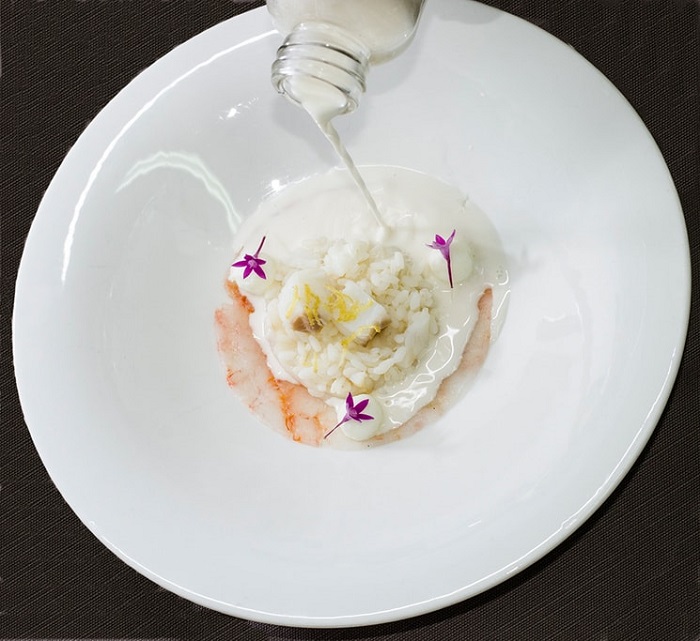 A little further inland, the trip reaches Antequera to stop at the Arte de Cozina restaurant , which has just got its first Sol Repsol.

Raspas, skin and less noble parts of different fish are used to make the smoked base for their gazpachuelo, while for the mayonnaise, made a moment before serving the dish, ecological eggs are used .  Once both ingredients are mixed, they add clams, prawns “or whatever is available and rich in the market at the time,” says the chef, Charo Carmona.

In this case there is no rice, but following in the footsteps of her mother, the cook gives a special touch by adding a handful of freshly fried straw potatoes.The idea has something of Antequera tradition.

“My mother put a tray of chips in the middle of the table and we all threw a few into our plates. It is my way of paying homage to her and of returning to my childhood “, says Carmona,   whose gazpachuelo is served warm since it’s always part of the spring – summer menu.

Very close is La Cosmopolita, whose brand new Sol Repsol does nothing but corroborate what the gastronomic world knew for years: that its chef, Daniel Carnero , knows very well what he’s doing.That in his last visits to Malaga institutions such as Ferran Adrià and Joan Roca have chosen his tables for lunch, says it all.

The menu varies almost daily “and the gazpachuelo is not always part of it”, warns Carnero, who appreciates the traditional preparation “based on hake, potato and mayonnaise”.“That’s what I like. Neither shrimp, nor clams, or anything else, “he says. He does incorporate   egg white , which coagulates in the broth and underpins the final taste.

Carnero dares from time to time to give some spin to the plate “because it is a perfect starting point for other ideas”. So, for example, last Christmas he made   some elvers with Iberian gazpachuelo , with a broth in which he had cooked manitas and vegetables and that, after mixing it with the mayonnaise, was completed with sauteed elvers.

He is even capable of taking it from the sea to the land, like the Iberian gazpachuelo , similar to the previous one but with a mayonnaise based on Iberian oil and accompanied by sautéed ear, jowls and prey.

The last of his contributions returns to the Mediterranean in the form of gazpachueladas coquinas that taste even better than what their name already conveys.

Also in the interior of the province of Malaga, Rubén Antón , a young chef with much desire, develops his good ideas in the Arxiduna restaurant .

He uses the gazpachuelo in two of his creations. The first,   serving it in a young coconut from Thailand .To do this, he elaborates the traditional recipe (also using the water of the fruit itself for the broth) and presents it with a few katsuobushi chips.It was a concept that emerged for last New Year’s Eve’s menu and, sometimes,   he repeats it again on weekends.

The second alternative, luckily, is always part of his menu.It is one of the most requested dishes by his customers and has the name Arroz submarino.

“It’s a plate of risotto with fish, seafood, plankton and seaweed, which is served in a fish tank along with gazpachuelo foam and a shrimp omelette” , says Antón, who is a show to watch in his kitchen.

The experience in this restaurant becomes even more mystical because its dining rooms are located inside an old cave that was pub a few years ago and a Paleo-Christian church many more years ago. 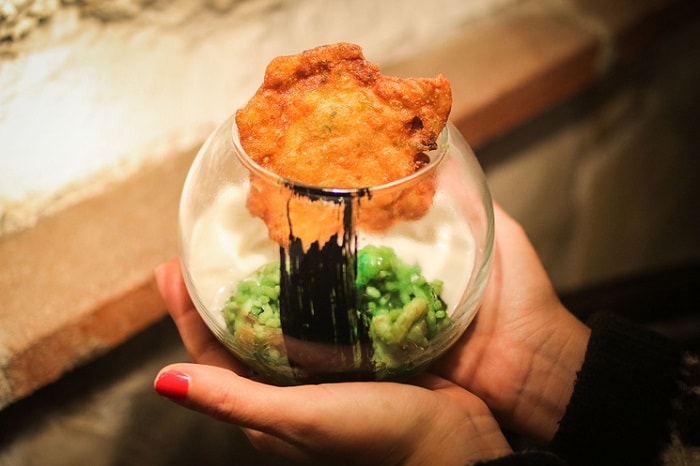 When the gazpachuelo becomes a mystical experience © Nacho Sánchez

The different ways of enriching malagueño delicacy are also practiced by Pepo Frade in Aire Gastrobar.

The gazpachuelo always forms part of his winter card , but every year he invents it in a different way.Currently, for example, it is served in   a dish called sealed scallops and gazpachuelo with dry trasañejo.  It includes tacos of violet potato and prawns, which in addition to flavor allows it to offer a colorful aspect.

Of course, he never adds rice:   “In my house, it was never done like that.I have never added it, “emphasizes the chef, who says that the broth is somewhat creamier than usual because   he cooks the fish with the potatoes,   which release their starch to provide texture.”It was a secret that Benito Gómez from the Bardal restaurant told me”, he reveals.

In fact, the Michelin-starred restaurant has on its menu the so-called cold and citrus Gazpachuelo, algae with cream and sardine , which is served very fresh.

“It emerged as we thought about what fish dishes had not yet been made with sardines and, also, our commitment to Andalusian cuisine,” says Gómez from Ronda . 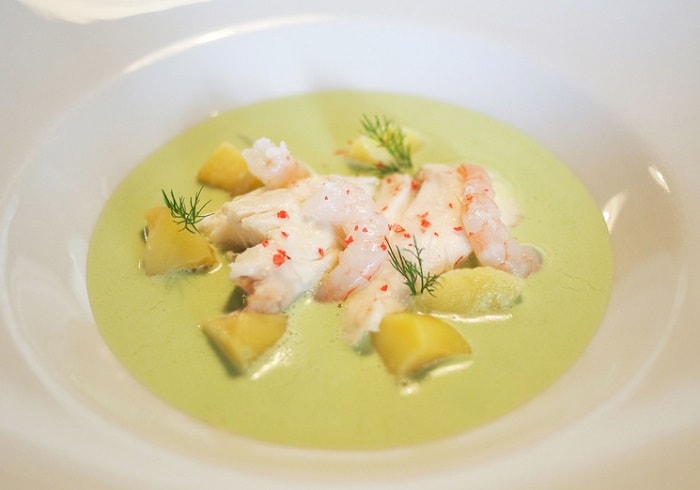 To finish, we closed the circular route returning east from the capital of Malaga to visit La Revuelta.

There, Arnault Scheidhauer makes a tasty gazpachuelo based on fish stock -in his case with a species called dente-, mayonnaise with a pinch of kimchi and liquefied green beans , which provide an emerald color to the dish.

A little bit of the juicy meat of the fish, potatoes, raw white prawns, dill and pink pepper top off its tasty formula, which usually appears on Fridays outside of the menu.

An exquisite way to end this tour of this monument of Malaga’s gastronomy called gazpachuelo.

If you’d like to learn more about traditional Spanish dishes, why not join on one of our Food tour ? It’s a unique way to discover Malaga and all the great food this city has to offer!