5 innovative restaurants in Malaga not to be missed

Some of them just opened. Others will soon celebrate their fifth anniversary. We check out five restaurants that are examples of the gastronomic evolution that has been going on in Malaga for the last couple of years. Forget about the ‘chiringuito’ and come to the centre of the city to immerse yourself in a tour of innovative menus, quality products and respect for the environment, but also, a good time. And don’t forget: We’re in the south!

After living a couple of years in Madrid, Javier came back to Malaga and passed his public examinations. He left the stress of the capital behind and found himself again in the south. A pleasant, calm, sunny place, and on top of that a job that gave him more free time. He decided it was time to take the leap and go for one of his dreams: to open a small wine shop. He wanted to make it look like one of those typical taverns in Madrid or in the north of the country, where they serve canned food, cold cuts and a lot of wine. He joined together with his brother Alejandro, and when they found the ideal property, it happened to have a kitchen. “So we gave a spin to the initial idea”, he says.

They added Argentinian chef Miguel Leona to the team, got on with it, and in December 2015, opened the doors of the García Taberna. A modern, interesting, welcoming, comfortable and lovely place. Situated right in the centre of the city, near plaza de la Merced and Teatro Cervantes. On the walls, you’ll be able to see some beautiful artwork from artist Javier Calleja, friend of the family. 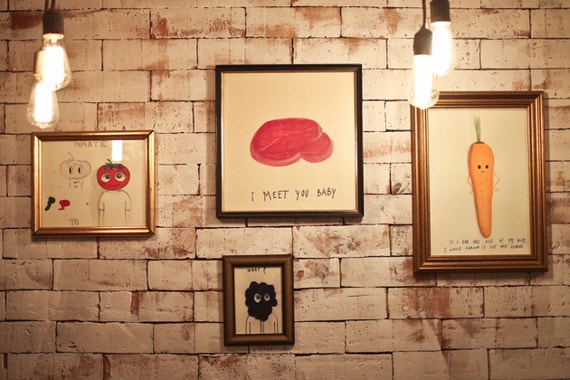 The gastronomic bet is that of the menu, which they define as eclectic: Asian suggestions with products of Malaga, and typical local dishes with an international touch. Of the 20 plates that occupy the menu, some are authentic delicacies, like the pork ‘GYOZAS’ and green onion tacos, the Iberian ‘BAO BUN’, the ‘lime cause with fillets of Barbate tuna’, or the exquisite sweet chilly prawns with black couscous. Also, the grilled octopus on ‘patatas revolconas’ needs to be mentioned, it is a classic on the menu that is modified every four months.

Everything is accompanied by an excellent wine selection that changes so you can always be surprised: today they have 16 types of red wine, 3 whites and 13 with a certificate of origin, but surely tomorrow the offer will have changed. It is not always necessary, but if you want to be sure to have a place, don’t doubt and call to make a reservation.

The ‘ruta  Alexso’ takes you on a journey full of gastronomic  sensations. From the mountain range to the vegetable garden to the refreshing beach, this trip allows you to enjoy some of the best local products of Malaga. The chef and owner José Antonio Moyano serves it in the shape of two appetizers, two entrees, fish, meat, first and second dessert. A challenge for the senses, in which enjoyment is assured.

All it takes is a taste of the invisible fried egg, of which we couldn’t take a picture because it simply doesn’t exist: it is made up from bread, olive oil, and a mixture of spices with a flavor that will no doubt surprise you. From there on, it’s all about tasting the delicacies proposed by this enthusiast chef, that masters the technique and steps away from minimalism. Among those delicacies are the half baked ‘foie’ with pineapple and cumquat-orange marmalade, ‘ajo blanco malagueño’ with prawn carpaccio and mango ice-cream, or the spectacular ‘presa ibérica’ with ratatouille and purple potatoes.

We musn’t forget one of the specialties of the house: Sea bass from the estuary with mollusk rigatoni and a pear ali oli. All can be paired to perfection with ciders, beers, and a wide selection of white, rosé and red wines, from which the local ones stand out, such as Chinchilla 6+6 of Ronda or various ones proceeding from Toledo and ‘las Rías Baixas’. 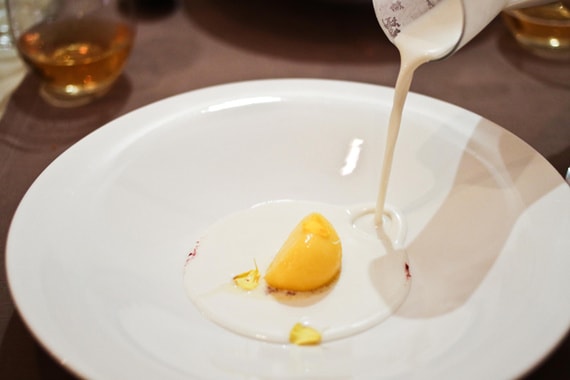 An amazing electrical flower prepares your palette for dessert, that comes double, so don’t forget to leave some room because it is worth it: the final stages are full of surprises. The refreshing apricot and rosemary ‘Bastón’  is one of them, although the most incredible dish is served just at the finish line: a salmon sandwich with French fries and ketchup, where nothing is what it seems.

The illusion, as well as the cared-for presentation and the great service are some of the extra ingredients of this restaurant, that opened last June 7th  2016, from the hand of Moyano and his wife. A risky but necessary bet, from a chef that has passed through the kitchens of establishments such as Montana, Limonar 40 or José Carlos García.

If you’re up for it, you might take the ‘Cocinando Sensanciones’ route, that lasts over 2 hours and fifteen minutes and includes new proposals, and, if you’re not sure, that’s not a problem: you can choose any dish from the menu in entire or half portion, so that you can leave your own marks in the gastronomic journey. You can even go with your kids, for whom they have a special route prepared. 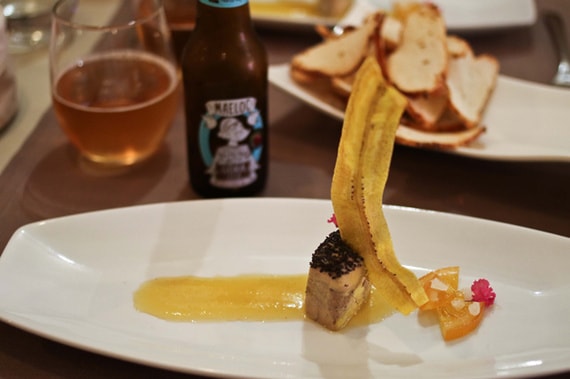 Chess-board floors, colored tables, nice decorations and temporary exhibitions. In the organic ‘tapería’ Astrid, the  appearance counts, but even more so does the flavor: the tomato tastes like tomato and the beef tastes like beef, something that is not so easy to find these days. The origin of their products is specified on the menu, so you’ll know that the lettuces come from Coín, the vegetables from the Guadalhorce valley, the rice from Valencia or the ecological beef from Sevilla; but the restaurant’s transparency goes even further: their kitchen is completely surrounded by glass partitions, so you can see how the chefs cook.

This allows you to confirm, for example, that they don’t own a deep-fryer: their cooking methods are steam, oven, grill or syrupe preserved??. “We understand that nowadays it’s difficult to eat healthy outside of home, and that’s how our concept started, for the need to find healthy food restaurants to eat well”, says Cynthia Astrid Mancho, one of the people in charge in the establishment. 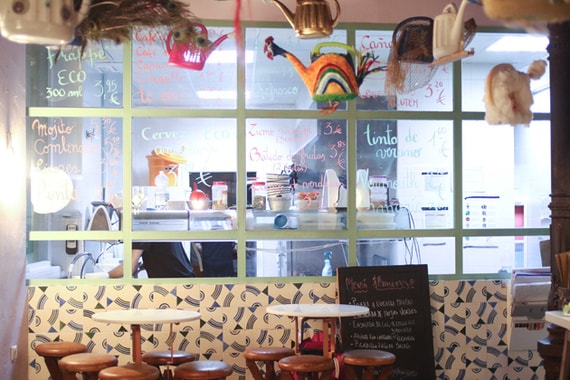 Astrid tapería organica will celebrate its third birthday in October, and, although lots of people from Malaga think it is a vegetarian restaurant, on the menu you can discover tasty suggestions that include meat or fish, from which it can be difficult to choose. Dishes like a corean ‘Bulgogi’or a Vegetable hamburger, coconut milk, vegetables and sesame with salad coexist with a savory ‘Porra antequerana’ or bio jasmine integral rice in Nepalese style; all of them respecting the ecological and biological principles.

On their wine menu you can find proposals such as Morena Mía (Yecla), Cortijo de Balsillas (Granada) or Adresito (Málaga). The menu changes according to the seasons, and to the products that are available at each moment.

“We don’t try to make it very elaborate, on the contrary, we want the flavors of the products to be present on each plate”, they assure in Astrid, emphasizing that the dishes are a 100 percent elaborated by them, even the bread and breadsticks are made there. The restaurant opens every day and another one of their specialties is breakfast: a buffet with ecological products, with exquisite bread, juices, butter, milk and even ham. What a way to start your day! 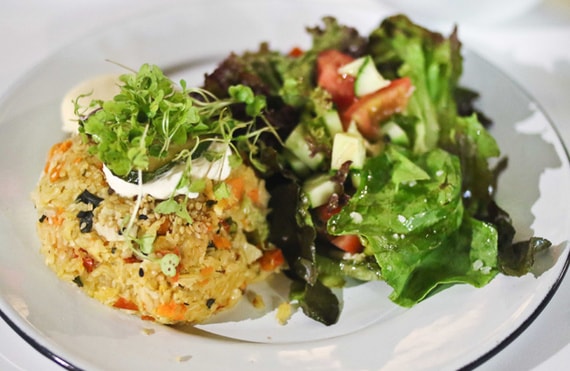 Although the word ‘Pimpi’ comes from an old popular character from Malaga’s harbor, when people use it nowadays, it is almost as a synonym for this city. El Pimpi is the most characteristic place for a Malaga/city that clings to tradition, to the classics, to good ham and even better wine (or vice versa).

The idea first came from a tale in which ‘El Pimpi’ asks the sun of Malaga for a lady, a dancing partner that illuminates his every day, and that, as the poem reads: “if she doesn’t love him, at least she should put up with him”. In response, the sun sends him his daughter ‘La Sole’, a modern woman that will revolutionize  and complement his world.

All of this took 45 years, because ‘La Sole’ opened its doors in  June 2016, while ‘El Pimpi’ was inaugurated in 1971. ‘La Sole’ is a tribute to the sun that warms the winters in Malaga, and that slows down the summers, accompanied by ‘terral’, a land breeze coming straight from hell.

The architect Miguel Seguí was the one to come up with the spectacular interior, illuminated by 80 lights that imitate the rays of the sun. It has been reinforced by the design work of Mateo García and Chema Aranda, leaders in the studies of Narita & Humad. Its start-up came to be because of the need for a modern complement for ‘El Pimpi’, that sticks with tradition but takes a step towards modernity.

And so, ‘La Sole’ also tributes the best palate: salads, cheese and ham platters, hamburgers, ‘pan bao’ with pickled tuna and even sandwiches. Beyond that, ‘porra de Antequera’ , meat and exquisite local fish.

The best thing is, on top of that you can pair all of these dishes with excellent cocktails, prepared by Jesús Luque, Sebastián Álvarez and Antonio Garrido. That way, it is always a safe bet a Manhattan with some tasty puchero croquettes or a daiquiri with a salmon and rucula hamburger.

Besides, at its doors you’ll find one of the countless graffitis that have flooded Malaga since a couple of years. On this occasion, from the urban artist Belin, that captured the city’s essence through hyperrealism with some touches of Picasso’s cubism. 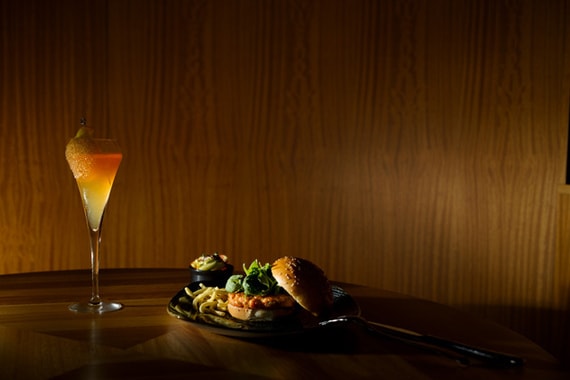 In ‘La Tranca’, you know when you walk in, but are never really sure when you’ll leave. It doesn’t matter which day of the week it is, which season, if you’re on holidays or have to work in the morning. What might be complicated, it’s finding a spot.

The place is always packed, whenever you go, so you might have to have your beers by the door. It doesn’t matter though, because there, happiness is easily summarized: cold beer, vermouth from tap, tasty Argentinean empanadas, chorizo ‘criollo’, a variety of Spanish tapas with the ‘tortilla de patatas’ as a base, amazing toast, and, lots and lots of fun.

Because this bar becomes a celebration of life as the hours pass by. Wednesday nights are for ‘Sabina full time’, while during the rest of the week it’s not difficult to find the crowd singing ‘Rafael’,’ la Carrá’ or  ‘Juanito Valderrama’, always encouraged by Ezequiel that, from the bar, knows every one of the hundreds of songs that are listened to between these 4 walls.

Old bottles of something home-made soda, a lot of ‘demijohns’ and old pictures of Malaga make up the decoration of this bar, situated in calle Carretería nr 93. They also display numerous vinyl LPs, with names such as Peret, Antonio Machin, Julio Iglesias or Rocio Durcal, among other great national classics. Although it seems as if it has been here forever, it only just celebrated its fifth  birthday. Long life!