La Rioja is one of the most important wine regions in the world. Talking about La Rioja inevitably means talking about its famous wines, but as man does not live by wine alone, it turns out that this small autonomous community also has a fantastic gastronomic heritage. You only have to take a stroll along the famous Laurel Street in Logroño (a real feast for the senses) to see that the people of La Rioja are very serious about las cosas del comer (things about eating).

Potatoes with chorizo or patatas a la riojana are the flagship of the traditional cuisine of La Rioja. A dish of humble origins, as simple as it is powerful, present in every home and which continues to have a place on the menus of all kinds of restaurants. One of those stews that, with just a few ingredients, can make you touch the sky.

In fact, one of its greatest followers was the famous French chef Paul Bocuse, leader of the “nouvelle cuisine” and one of the most important chefs of the 20th century. The now mythical anecdote tells that in 1979, Bocuse was hired by the Cune winery to be in charge of the commemorative meal for its centenary. There, after tasting the potatoes with chorizo that the winery’s cook had prepared, the French chef uttered a now legendary phrase: “You people are fools because this is much better than what I am going to give you later”. A love declaration that contributed in a decisive way to make this stew known beyond our borders.

So now, the only thing left to do is to uncork a good Rioja red wine to whet your appetite while we go into the kitchen. Let’s get started with the recipe! 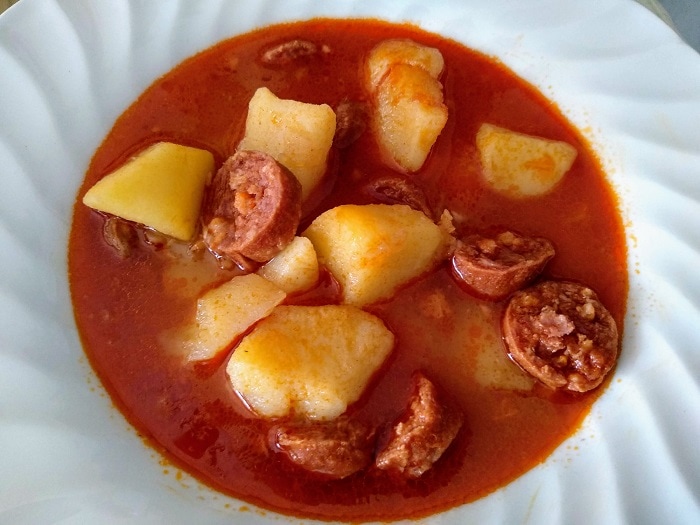 – If at the end the stew is too soupy, we can take out two or three potatoes, mash them with a fork, add them again and cook the whole thing for 2 or 3 minutes more. In this way it will be more thick.

– You should also let it rest between 10 and 15 minutes with the pot covered before eating it.

– It is very typical to accompany this dish with pickled peppers or chilli peppers (the combination is sublime!) and, of course, with a good glass of local wine, which is exactly why we are taking a little piece of La Rioja home!