The traditional Spanish recipe book is full of culinary creations born out of necessity, hunger and the hardest periods of our history. Garlic soup (or garlic soups, as we can also refer to it in the plural) is a direct heir of this “subsistence cuisine” that our ancestors were forced to practice. A cuisine in which, by dint of turning necessity into a virtue, true gastronomic gems were created, such as this modest stew that captivated Alexander Dumas himself on one of his travels through Spanish lands.

Although it is difficult to pinpoint when garlic soup was born, there is usually a general consensus in pointing to Castilla y León as its place of origin. That is why it is often also called Castilian soup, although on this point the more purist connoisseurs differ, defining Castilian soup as more brothy than the former.

What is clear is that, due to its richness, its simplicity and the cheapness of its ingredients, it became the ideal lunch for shepherds and peasants who were able to combat the long Castilian winters thanks to this comforting dish.

Water, salt, garlic, stale bread and paprika are the basic ingredients of this recipe that allows an infinite number of variations depending on the region where we find ourselves. Some people replace the water with broth (chicken or poultry) and the paprika with ñoras or choricero peppers. It is also common to add a little bit of chorizo or ham, and in seaside areas it is not uncommon to find it seasoned with some type of fish or seafood.
What is common throughout the country is to add an egg per person, either whole or beaten, which gives added consistency to the dish.

Here is the recipe for this humble marvel: 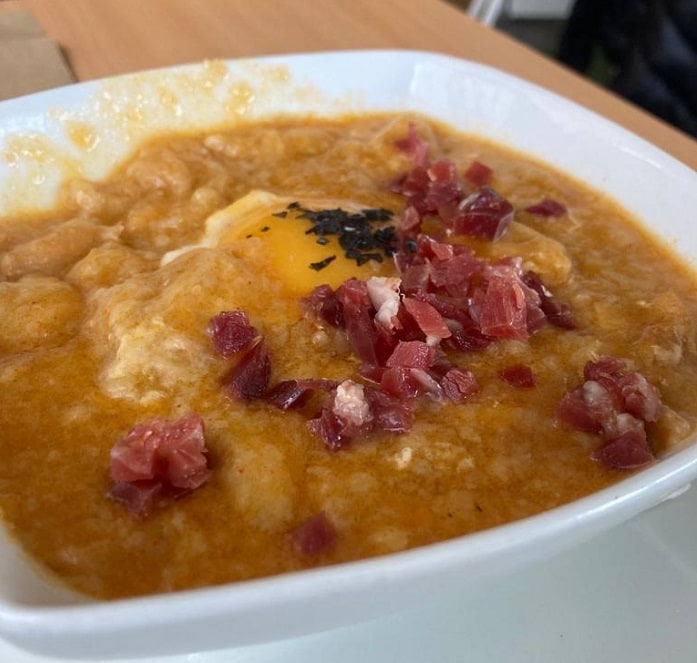 1.- Peel the garlic cloves and cut them in not too thin slices.

2.- Add extra virgin olive oil in a saucepan until the bottom is covered and heat over medium heat. Add the sliced garlic cloves and fry them until they begin to brown a little, being careful not to burn them (a couple of minutes).

3.- Cut the bread slices in two or three pieces and add them to the pan. Fry them together with the garlic until they soak up all the flavors (a couple of minutes on each side).

4.- Cut half of the Serrano ham into strips or cubes and sauté with the rest of the ingredients for a couple of minutes approximately.

5.- Remove the pan from the heat and add the two types of paprika (this will prevent them from burning) and mix well.

6.- Add the water or the broth, salt to taste and put it back on the heat, at medium-low level, for 20 minutes.

7.- Then, turn off the heat, crack the four eggs directly into the pot and cover it so that they cook with the residual heat. Another option is to beat the eggs in a bowl and add them at the end, when the soup is still on the heat. Or you can also separate the yolks from the whites, add the whites to the boiling soup and add the yolks once the soup is served in their corresponding containers.

8.- Once the soup is served, garnish with some of the Serrano ham that we had set aside.