Skip to content
Home » Traditional spanish food » Churros: From a humble fried dough to one of the most iconic Spanish food.

Churros: From a humble fried dough to one of the most iconic Spanish food.

There is no doubt that churros are one of the most recognizable icons of traditional Spanish gastronomy. This humble and forceful fried dough is also one of our most international ambassadors. Because churros have long since transcended national borders and become a valued delicacy throughout the world, reminding us in the process that sometimes the simplest things are the best.

From London to Jakarta, passing through Melbourne, Tokyo or New York, today it is possible to taste this simple treat in countless countries, sometimes adapted to local tastes and / or transmuted into impossible shapes, colors and flavors that have little to do with the traditional churros of our country. Because, when it comes to talking about tradition, Spain remains the country of reference when it comes to churros. Not surprisingly, in many countries they are still known as “Spanish donuts”. There must be a reason! 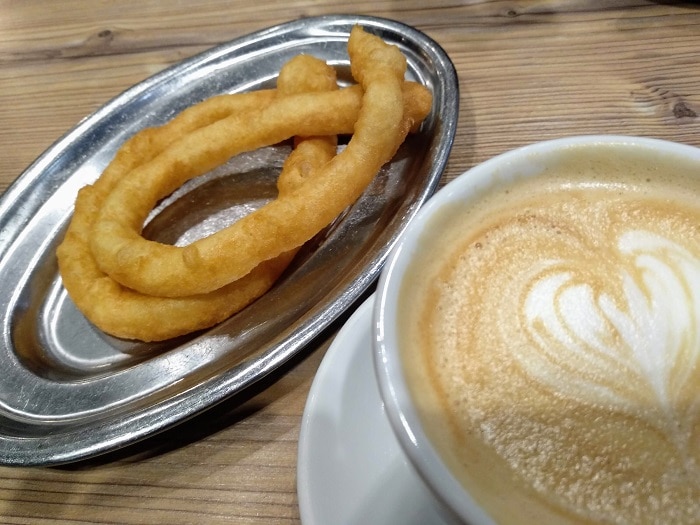 A Little Bit of History.

As it happens with so many other traditional recipes, tracing the origin of churros is not an easy task and there are several commonly accepted stories about them.

One of them says that it was Portuguese merchants who, at the beginning of the 16th century (some indicate the exact date of 1513), discovered in China what was known as “youtiao”, a fried salty dough strip that was served for breakfast and then exported it to the Iberian Peninsula, gave it a star shape that it still retains in some of its modalities and made it sweet. Similarly there is another theory that indicates that it could have been Marco Polo who brought them from China in 1269 to be introduced later by Sephardic cuisine using the fried dough technique. In fact, its Arab origin is also considered probable and there are very similar recipes found in medieval and even Andalusian manuscripts, such as “Hispano-Maghrebi cuisine during the Almohad period ”, dated in the 13th century.


Another story indicates that churros were invented in medieval times by Spanish shepherds from the Castilla y León area who, due to their lack of infrastructure to bake bread in an open field, had to resort to frying a similar dough as a substitute for their main source of carbohydrates. Many stories also frame the origin of their name in this context, since it is often said that they were called churros because of their similarity to the horns of churras sheep, an indigenous breed from those latitudes.

Although there is no consensus here either, since others emphasize that the word churro is much more recent, given that it was introduced in the dictionary of the Royal Academy of the Spanish Language in 1884 as a synonym for cuhombro.

What does seem to be true (or at least it does not present so many dissensions), is that it was the Spanish conquerors who, after their success in the Iberian Peninsula, decided to export churros to the New World. And today their popularity in Latin America is such that many do not hesitate to assure its Mexican origin, although this theory loses consistency if we take into account that the oldest churrería in the country, Churrería El Moro, was founded in 1935 by the Navarrese emigrant Francisco de Elizondo in Mexico City.

It is also true that, as a counterpart, the conquerors brought back chocolate, without which the churros would not be as popular, since it is in that combination where the greatness of this snack lies. 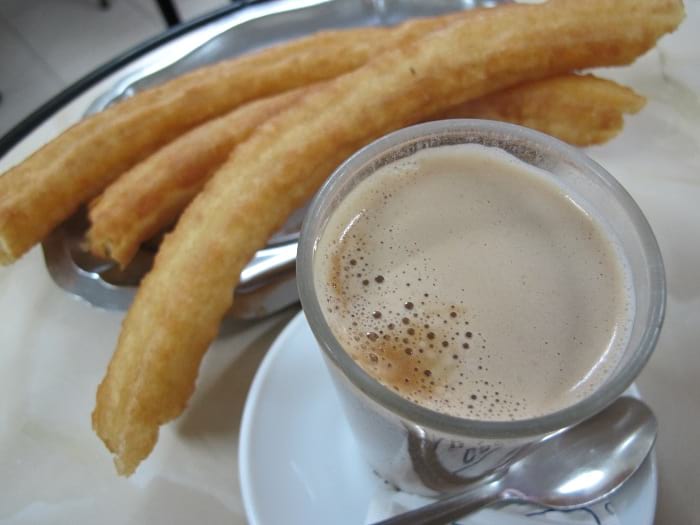 Wheat flour, water and a pinch of salt. Those are the ingredients common to all churros. And despite the fact that it is the name “churro” that in the end has prevailed throughout the world, this same mass (sometimes with slight variations) can receive different names depending on where we are.

If, for example, we stayed in Andalusia, we would find that in Malaga, Granada and Cádiz they are known as Tejeringos, in Córdoba as Jeringos, in Jaén as Tallos and in Huelva and Seville as Calentitos.

Despite everything, there are several types that are usually common throughout the national territory. Taking the province of Malaga as an example, we could basically distinguish three:

Ingredients: flour, water and salt. They are usually thinner, smaller, striated, and shaped like a bow or a small cane. They are also known as Madrid churros or potato churros, some say that because their raw dough resembles mashed potatoes and others because in the past, sometimes potato starch was added to the mixture because the flour of that time was less strong. 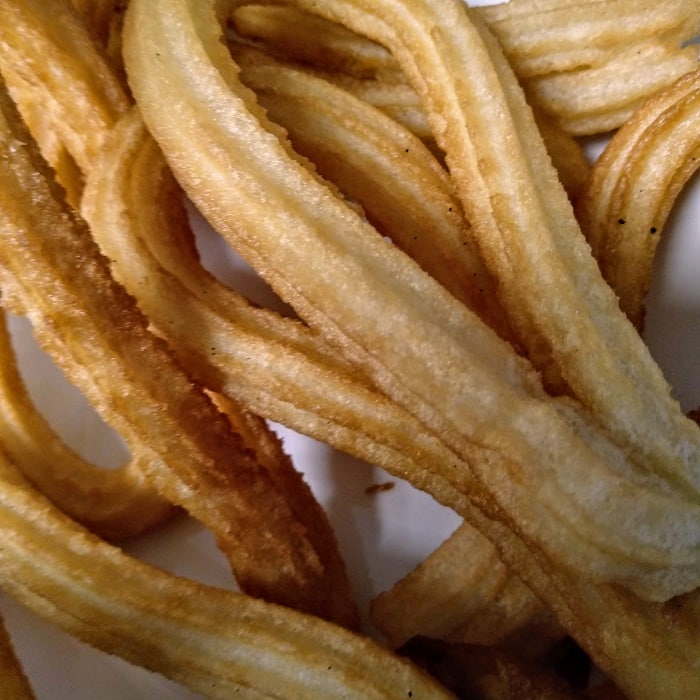 Ingredients: flour, water, salt and a pinch of baking soda or yeast. In this case, warm water must be used so that the bicarbonate or the yeast react. The dough is poured over hot oil in a spiral (known as “wheels” or “threads”) and then cut into long pieces, thicker than the previous ones but also fluffier. Some people call them “classic churros”. 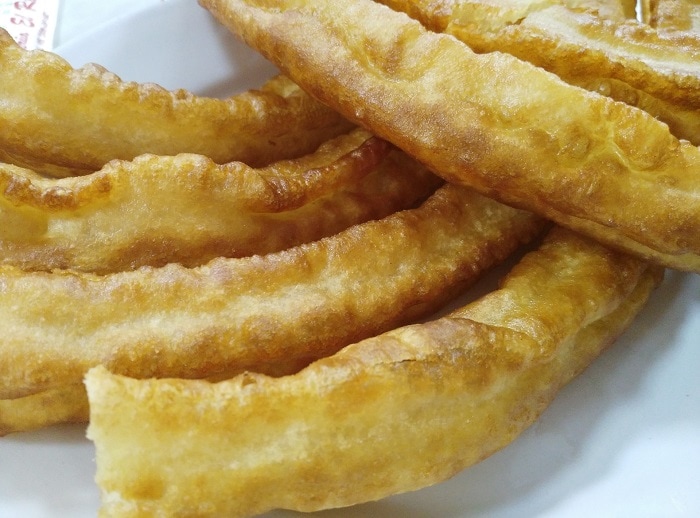 Ingredients: flour, water, salt and a pinch of baking soda or yeast. The basic difference with the previous ones is that a lesser amount of flour is used, so they are lighter.

They are the most typical in the province of Malaga and got their name from the syringe-like instrument used to make them. It is often said that they are more laborious because their dough must always be fresh, unlike that of the other two, which can be frozen. Traditionally they were made in the form of a bow to facilitate their transport, introducing the hoop in reed branches. 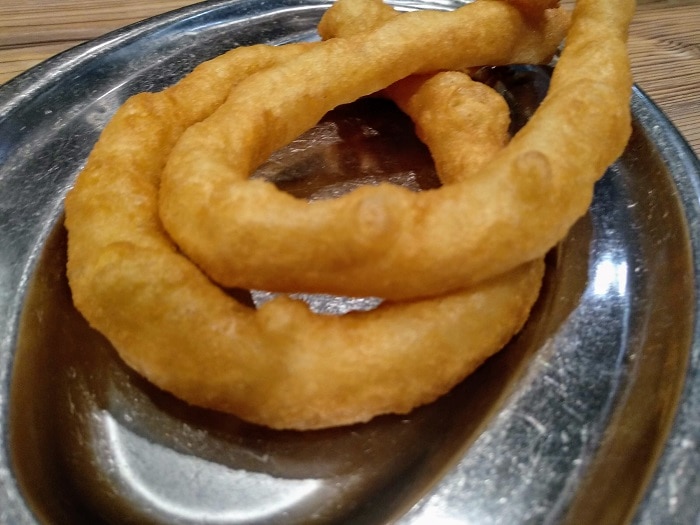 Another element under debate is the oil that has to be used to fry them, although it is usually agreed that sunflower oil or extra virgin olive oil are the most suitable, the latter being sometimes less advisable both due to its high price and for adding excess flavor to the churro.

When and where to eat Churros.

Due to its nature associated with sweetness, outside our borders churros are usually identified as a dessert, something quite inadvisable given their forcefulness. In fact, unlike many Latin American countries, churros are not usually sprinkled with sugar and cinnamon here and it is not too popular to consume them stuffed (chocolate, dulce de leche, etc.) excepto for at some fairs, parties or specific moments.

The “churro” moments par excellence in Spain are two: with a good coffee for breakfast or accompanied by a dense hot chocolate in the afternoon for a snack. They are also often a powerful ally to alleviate certain ethilic mornings and it is not in vain that it is a tradition to have churros for breakfast on New Year’s Day after a long night of excesses. And although they are also usually linked to the colder months and it is true that on dates such as Christmas there is a tradition of getting together to eat some churros, any time of the year is good to enjoy them. 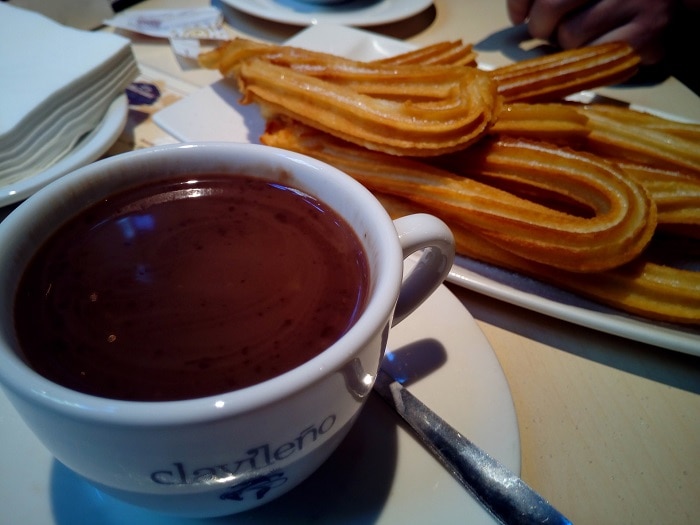 Where to eat them in Málaga

Malaga has a long tradition of churros and there are many places where you can enjoy this hypercaloric wonder. These are some of our favorites in the city center:

(Plaza de la Constitución, 11. Tlf: 952 224 972) Located in the heart of the city center, this emblematic corner from the beginning of the last century is responsible for the Malaga coffee nomenclature.

(C / Méndez Núñez, 6. Tlf: 952 224 950) Although this is a more or less recent franchise, it has around 12 stores throughout Andalusia and its work to recover the traditional Malaga Tejeringo is commendable.

Where to eat them in Seville

This is our selection of churrerías or calenterías in Seville:

(Plaza de la Encarnación, 8) An obligatory meeting point on Good Friday morning. In addition to the lounge, it has a good terrace where you can savor a good portion of churros (or warm ones) with chocolate

(Calle Lineros, 9) Small traditional place founded in 1904. Many people say they are the best churros in the center of the city. The truth is that the churro wheels served here are delicious.

(Luis Montoto, 131) It is especially recommended to order the churros de rueda with their exquisite chocolate. Quite a show for your tastebuds!

(Virgen de Luján, 41) Located in the Los Remedios neighborhood, this establishment has been serving churros de rueda with chocolate since 1976 that they themselves manufacture of the brand Virgen de Luján.


About the Author: Javier Fernandez