The pintarroja (Scyliorhinus canicula, also known as small-spotted catshark. sandy dogfish, lesser-spotted dogfish, rough-hound or morgay) is a small shark, half a meter long, grayish in color with dark spots all over its skin. In Malaga it is served in soups, casseroles and marinated.
The “caldillo de pintarroja” is a hot soup with a very characteristic spicy note.

This seafaring dish was once enjoyed by fishermen when returning from a day’s work and little by little it was introduced in the tables of almost all the bars and taverns of the city.
It used to be drunk in a mug or cup with a glass of white wine on the side to compensate for the spiciness. The fish and seafood that settled at the bottom became finger food once the liquid had been sipped.
Today it can still be tasted in many places in Malaga, although it is served as a soup in most of them.
Whether drunk or in soup, this broth never fails to leave an impression. Here is the traditional recipe! 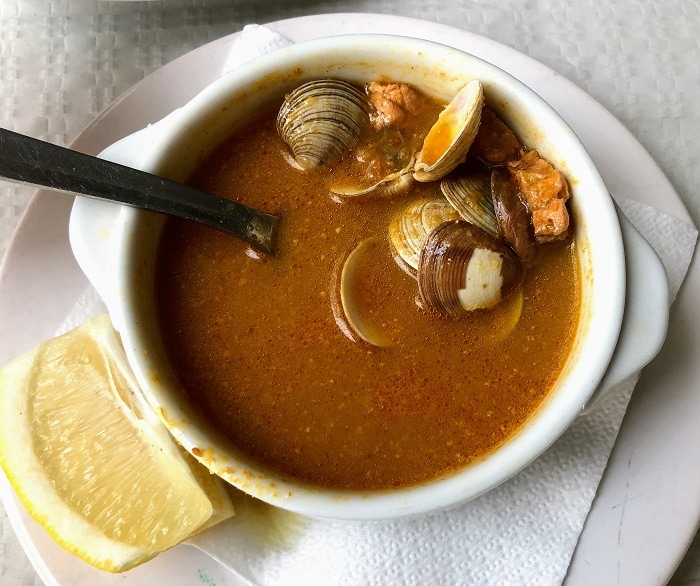 *Depending on how spicy we want the broth, we can chop the chili peppers and puree them together with the rest of the ingredients in the blender. This way it’s a lot spicier.

**It is possible that during boiling, a white foam floats up from the fat and foreign bodies coming from the pintarroja and the rest of the ingredients. With a ladle we can remove it to get a cleaner soup.

***The pintarroja is a very tender fish that needs little cooking time so we must be careful that it does not fall apart.

About the Author: Javier Fernandez