Where to See Authentic Flamenco in Malaga

The poet Manuel Machado, the brother of the also poet Antonio Machado, when reviewing the eight Andalusian capitals defined Malaga as cantaora (flamenco singer). Flamenco has been very present in this city, which is home to one of the best flamenco singers in history, Juan Breva, after whom the main peña flamenca (flamenco club) in Málaga is named. 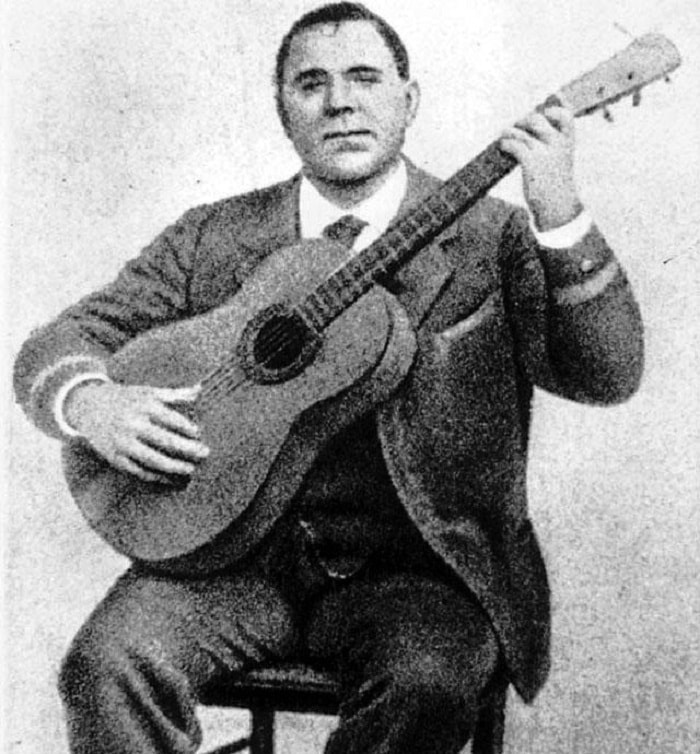 The origin of flamenco, although hazy, seems to be born from the hodgepodge of Andalusian villages from the so-called cantes andaluces at some point in the 18th century. The coexistence of Muslims, Jews, Christians, Castilians and Gypsies has resulted in this mestizo artistic phenomenon, declared by Unesco as Intangible Cultural Heritage of Humanity.

Nor is the origin of the name clear, since while some associate it with the welcoming dances of Carlos V, the emperor born in Flanders, for the Andalusian politician and scholar Blas Infante it would come from the Arabic term ‘fellah min gueird ard’, which referred to the moors without land (Moors are Muslims converted forcibly to Christianity), many of whom were integrated among the gypsies.

Flamenco is played (guitar), sung and danced and the different official varieties are called palos, some of which were born in Malaga as is the case of  la malagueña.

At first there was neither dance nor musical accompaniment, it was only singing. In fact, there are still some palos that are played without a guitar melody, known as a palo seco songs, in which the voice is the only support. The dance element and guitar did not appear until the nineteenth century.

There are still some places in the city to enjoy the best flamenco, the most important of all, the Peña Juan Breva, the oldest in Spain, was founded in 1958. It also has in its facilities a Flamenco Museum, with more than five thousand sound files and dozens of objects related to famous artists from Malaga such as Juan Breva, El Piyayo, La Trini, Diego el Perote, Ángel de Álora or La Paula.

Every Thursday and Saturday the club organizes flamenco shows starting at 8.30pm. In addition, on Tuesdays, at 9.30pm, a free session of flamenco studies is offered to anyone who wants to delve into this art.

Since 2002, the Flamenco Kelipé Art Center has been operating in the old town of Malaga , with the particularity that it is a flamenco dance school that offers the Flamenco de Ley show three nights a week, a tribute to the gypsy people which is all about improvisation. You’ll be able to hear and see the dancer and flamenco singer Susan La Yedra, the singer Antonio El Taranto and the guitars of El Indio and Azukita.

Flamenco de Ley is performed on Thursdays, Fridays and Saturdays from 9:30 p.m to 11 p.m.

With one of the largest collections of musical instruments in Europe, MIMMA, the Interactive Museum of Music of Malaga, is located in the palace of the Count of Navas, in the old town, and has the particularity that visitors can play and enjoy its instruments. Its motto is ‘Please touch’.

Opened in 2003, it also has a space reserved for live flamenco and almost every day offers the show ‘Jaleo’, a walk through the songs and dances of this millenary art, with a duration of 45 minutes. The museum also offers the opportunity to enjoy Jaleo combining the musical experience with lunch at the Clandestino restaurant, very close to its headquarters. 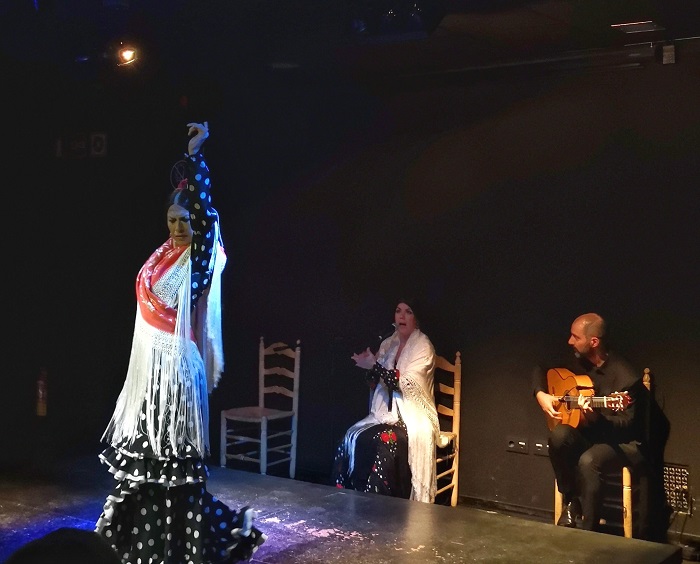 Located on the same street as the Juan Breva Club, the Flamenca Amargo Tavern is a small space to drink and dance at night, very frequented by locals and lovers of Holy Week, the bulls and flamenco in general. Flamenco performances are offered throughout the year.

Flamenco and local gastronomy is what Cal y Canto Restaurant offers, in the beautiful Plaza de las Flores, next to Calle Larios, the main street in the city.

There are performances every Thursday, Friday and Saturday at 20:00 and 22.15. 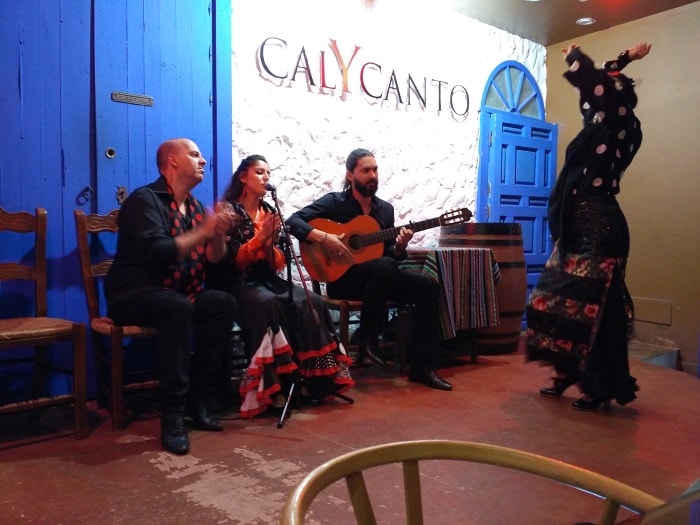 Located in the neighborhood of La Malagueta, very close to the Plaza de Toros and Muelle Uno, the ‘Tablao Flamenco Alegria’, is both a restaurant and theater, where you can enjoy a flamenco show and a  Mediterranean Fusion cuisine.